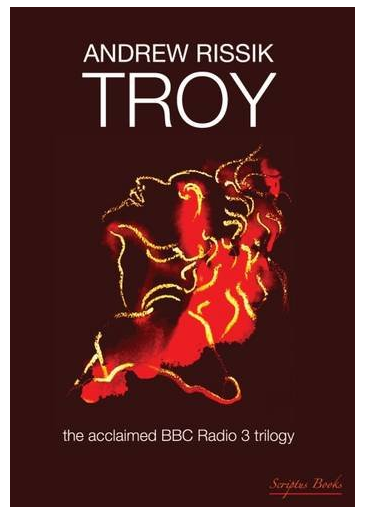 Available in the exhibition bookshop: 'Troy' by Andrew Rissik is the play script of the acclaimed Radio drama Trilogy on the timeless story of Troy, first broadcast on BBC Radio 3 to great critical acclaim. Performed by a star studded cast, led by Paul Scofield and produced by Jeremy Mortimer, the script compels the reader with the freshness of its' poetry of "passionate love, bloody revenge and furious argument with the whimsical gods."

"If Troy has a theme, it is accepting what life throws at you, the grace that is left when ambition and possessions and everything else you thought made life enjoyable have been stripped away." (Andrew Rissik in interview with Robert Hanks in the Independent)

"Easily the radio drama event of the year... a triumph. No one could have wanted this compulsive, gripping epic a second shorter... stupendous... a Trojan War for our time." - Ken Garner, The Express On Sunday

"Irresistible. A magnificent marriage of the epic and demotic. Is there anywhere else in the world that this kind of work can be found? Radio 3: trail this, promote it, cherish it, and above all repeat it." - Anne Karpf, The Guardian.